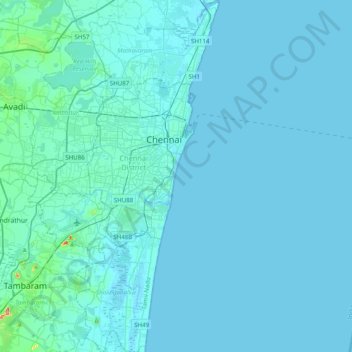 Chennai is located on the south–eastern coast of India in the north–eastern part of Tamil Nadu on a flat coastal plain known as the Eastern Coastal Plains. Its average elevation is around 6.7 metres (22 ft), and its highest point is 60 m (200 ft). Chennai is 2,184 kilometres (1,357 mi) south of Delhi, 1,337 kilometres (831 mi) southeast of Mumbai, and 345 kilometres (214 mi) east of Bangalore by road. Two major rivers flow through Chennai, the Cooum River (or Koovam) through the centre and the Adyar River to the south. A third river, the Kortalaiyar, travels through the northern fringes of the city before draining into the Bay of Bengal, at Ennore. The estuary of this river is heavily polluted with effluents released by the industries in the region. Adyar and Cooum rivers are heavily polluted with effluents and waste from domestic and commercial sources, the Coumm being so heavily polluted it is regarded as the city's eyesore. A protected estuary on the Adyar forms a natural habitat for several species of birds and animals. The Buckingham Canal, 4 km (2.5 mi) inland, runs parallel to the coast, linking the two rivers. The Otteri Nullah, an east–west stream, runs through north Chennai and meets the Buckingham Canal at Basin Bridge. Several lakes of varying size are located on the western fringes of the city. Some areas of the city have the problem of excess iron content in groundwater.